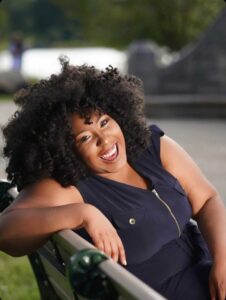 As we uncover fresh , young talent , Jodee Singz takes us behind the scenes of how she put together a remix of ” Yon Ti Mo ” originally performed by World wide artist Emeline Michel , and the shooting with Haitian – American videographer , Woodson Vixama of DZK Image . Jodee goes into detail on how difficult it was to shoot her first music video ” Yon Ti Mo. ” She elaborates on how it took a toll on her not only mentally but physically as well . ” It was a dream come true , yet , a nightmare to come , ” she states . Her main concern was not the musical aspect of the song , but per say the imagery . She elaborates on how the Haitian Music Industry are very critical on plus size women , but yet it was a risk she was willing to take . Jodee says , ” The minute the came started rolling , I knew it was time to put up the wall of Jodee and take down the shy girl act . ” Jodee in addition explains deeper on how the shooting was time consuming , with excessive movements to many different areas and locations , she was not ready to face what had yet to come . We ask the young artist , what made her choose to remix this specific song ? Her answer , is that the song spoke to her in what she was feeling in the moment . She states , ” sometimes you are so in love , yet so scared to say the ” L ” word . And even more terrified to give your heart . ” Jodee opens up about how she watch so many people in her generation talk about falling in love but scared to display it , so this song was to give a little assistance on how to express it . Jodee sums up everything altogether by stating how in the end of all her hard work , she managed to learn self acceptance . She elaborates on her struggle with self confidence , especially infront of AL the camera . Though filled with insecurities , accepts the way she is and hopes the public does too . ” Yon Ti Mo ” by Jodee Singz is out now , streaming on all platforms , and major radio stations . Stay tuned for more .

The United States has designated China, Iran and Russia among other nations as “countries of particular concern” under the Religious Freedom Act, secretary of state…

India’s Ambassador to the US, Taranjit Singh Sandhu handed over the Padma Bhushan, one of the country’s highest civilian Awards, to Google and Alphabet CEO…