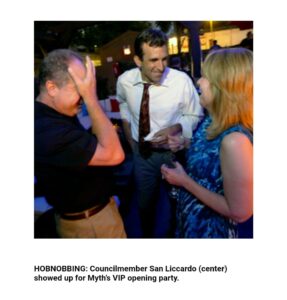 With that in mind, the club is spinning house, techno and Top 40 remixes 10pmÐ2am every Thursday, Friday and Saturday. Barrera explained that while lots of clubs in San Francisco can successfully play nothing but obscure house and techno songs, Myth has created a fusion by playing a lot of house and techno remixes of the Top 40 and hip-hop songs people in San Jose love. “It’s similar, but the presentation is different. You got to have those beats and vocals for San Jose,” Barrera says.

Last Saturday night, the music was pumping inside and out on the patio—loud enough to want to get down to, but not so loud that people were unable to have a conversation if they wanted to. The setup is smart: dim lights, waterfalls on the wall, simple yet classy ambience. It is a fairly narrow club, but there’s plenty of room out in the patio, with bars available both inside and out. There’s no cover to get in, but there is a dress code: fashionably casual. So far, since their grand opening on July 8, the laid back, mature vibe seems to be working.

The fact that Myth is also a Greek restaurant puts a little twist on the concept of club dining. There is a limited version of their menu available till closing. There’s also Greek beer (Mythos) available at the bar.

Those looking to make their experience even more upscale can hang out in the roped-off VIP section in the patio. There they can sit down at comfortable plush white couches and have a table all to themselves. There is a $250 table minimum at the VIP tables.

There’s live music at Myth on Thursdays, Fridays and Saturdays between 6pm and 8pm, with reggae and cover bands. The live music is there mostly to create an entertaining backdrop for dinner; the real party begins after hours. So far everything has gone been better than expected,” Barrera says. “People are excited that we’re not playing the same music as all the other clubs.’