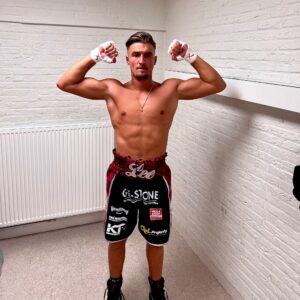 The boxing meeting, Claude Van Den Heede was a satisfied organizer. “It was originally decided that we would only have the Ghent Boxing Gala take place once a year. Due to the success of last Friday, Patrick Orlans announced that the next edition would be before March or April.”

Lee Ingelrest confirmed his coming man status against Bilal Kara, widely regarded as the best viewing piece of the evening. Ingelrest’s supporters had set up an action in advance with Bengali fire. “Someone called me out,” said the Gentenaar. “When I saw them, my motivation and self-confidence increased enormously.”

“Kara is a real fighter, so I had to be careful not to get caught up in his game. I kept doing my own thing, boxing carefully and not taking too many risks. Despite the nerves after a long time without camp, I remained calm. That composure is in my style, reading the opponent and trying to hit him on the counter every time.”

In the end, Ingelrest came out on top (59-54, 60-53 and 59-54). “I had to fight for it, because my opponent clearly wanted to knock me out. I immediately felt that he would not win on points and had to pay attention to his right swing,” said Ingelrest. “He delivered some good corners, but I wasn’t impressed and was able to react well myself.”

US District Court Judge Edward Davila sentenced Ramesh “Sunny” Balwani to nearly 13 years in prison, then 3 years of supervised release for his role…

Olympic gold medalist Brittney Griner was freed from prison in Russia and on her way home Thursday, President Joe Biden said at the White House.…