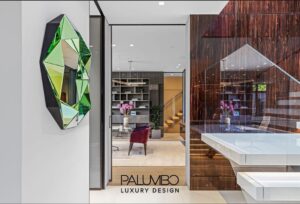 A pair of Los Angeles developers are putting a 29,600-square-foot Contemporary-style mansion on the market in Bel Air with a price tag of $100 million. They’re touting walls of glass for spectacular city and ocean views, a 16-seat home theater, an infinity pool, tennis court, and a wellness center with a massage table that features a pulsating hydro-massage system. The only wrinkle is, it hasn’t been built yet. Ground won’t be broken on the project until spring, and it won’t be completed until some time in 2018.

The mansion at 911 Tione Road is one of a handful of high-end properties to hit the Los Angeles market recently before ground has been broken–in fact, before the final permit has even been stamped. In a reversal of the traditional ultra-luxury market practice in which speculative builders near completion before they sell, developers Michael Palumbo and Jay Belson are offering buyers an alternative: a lot with fully-engineered plans for $32 million.

Conventional wisdom dictates that builders get the best prices for speculative or “spec” homes (those built without a committed buyer) in the last months of construction, so marketing before then has traditionally been considered unwise. “In the earlier decades it was very unusual for a developer to sell a lot right away,” said agent Joyce Rey, who shares the listing agent with Christopher Damon, both of Coldwell Banker Previews International. “We’d always say in selling you have to have a furnished finished product.” 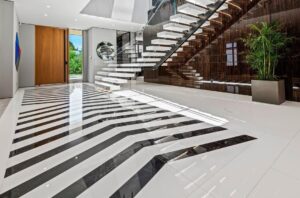 But with foreign money flooding into L.A.’s ultra-luxury market and prices climbing north of $100 million, some ambitious developers are ignoring the old rules. The model at 911 Tione Road is a kind of hybrid of a full custom-build, in which a buyer buys a lot, deals with the city, and secures the architect, interior designer and construction team, and a turn-key product, where the home is delivered–as the cliche goes–with everything from the furniture to the toothbrushes. This model might appeal to buyers who want some control over their home-building process, but without the headache and uncertainty of the city permitting process and the hassle of hiring all their subcontractors. “Most of these guys buy from Neiman Marcus and they buy the best of the best,” said Palumbo. “They don’t want to be involved in the daily details.”

For a potential buyer, the upside is the opportunity to customize, and possibly a lower cost if the land purchase plus build-out and developer fee doesn’t quite hit that $100 million mark. The model also reduces risk for Palumbo and Belson, who get their property marketed early and potentially secure a committed buyer sooner in the game. With prime lots a hot commodity in Los Angeles, early marketing allows the developers to compete with finished high-end homes that are already on the market. “Maybe it also helps builders for other projects that they’re doing,” said Jeff Hyland, president of luxury brokerage firm Hilton & Hyland. “Most of these aren’t doing one at a time, they’ve got several. “Indeed, Palumbo and Belson have followed the same model with two othe 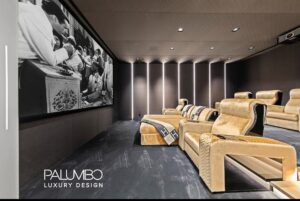 r properties. Their Beverly Hills spec home hit the market with a price tag of $45 million in December for the lot and the plans. They paid $8.05 million in May 2015 for that property, at 1426 Harridge Drive in Beverly Hills, according to public records. They also sold a property at 11005 Bellagio Way for $14.5 million in January 2015.

Nearby, the three-home Park Bel Air development being built by Domvs London has a similar business model. Domvs and its financing partner Junius, a division of JP Morgan, purchased land that was previously owned by real estate heir Steve Bing, who strung together a series of lots and tore down eight houses. Domvs turned the 11-acre property into the three lots; the first, at 788 Tortuoso Way, will be ready for construction by early March and is being offered with fully-engineered home plans for $45 million. For $115 million, Domvs will build those plans, which call for a 42,500-square-foot, six-bedroom main home plus a 15,000-square-foot, five-bedroom guest home.