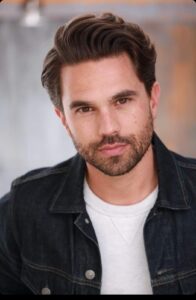 Casey Dolkas grew up in sunny Southern California. After begging his parents to drive him to auditions at a very young age, Casey became a working actor having appeared in several large commercials and film/TV projects. Casey Dolkas co-stars in new UpTV romantic comedy movie “The Nature of Romance.” playing now

After graduating from USC School of Dramatic Arts & School of Cinematic Arts, Casey continued his classical acting training at Oxford University. Since then, he has worked on popular TV shows on CBS, Showtime, Disney, and Comedy Central. He also starred in an indie horror film, and he played the beloved George Michael in a docu-drama. He is currently in development as a Producer for a handful of projects including a psychological thriller feature film.

Regarding his work at NeueHouse:
I safely brought events back in a pandemic world. This includes events such as: Netflix “The Crown” Netflix “Bridgerton” Netflix premiere of “He’s All That”… A24 “Zola” … HBO “Succession” FX “Reservation Dogs” premiere, as well as Hulu, Disney, Amazon. In addition, I launched a rooftop live music series at NeueHouse with performances by Moby, Arlo Parks, Gabrielle Current, Raissa, Syd B. I am also opening our DTLA location in the iconic Bradbury Building, and later Venice Beach.”

Hollywood is geared towards members being invited to collaborate and connect, whether as entrepreneur, screenwriter or graphic designer. The Hollywood location is a hundred-thousand square foot historical building, boasting event spaces which include screening rooms, soundstages, and rooftops. Here, utilizing the outdoor spaces for events and premieres for clients such as Netflix, Amazon, HBO, Disney, Hulu, and others. Dolkas has also launched a rooftop live music and screening series, for which he curates talent and titles.

Aside from his acting career and event producing at NeueHouse, Dolkas has now entered the avenue of film and series production. Currently, he is in the process of seeking financing for a feature film with a psychological thriller screenplay. He describes it as an amazing, twisted, dark screenplay which he’s currently shopping around. He said:“We’ve had some amazing traction; it’s been an amazing learning opportunity and something I’m so excited to do.”

Reflecting on his diverse and action-packed career he regards his role as George Michael in ‘The Price of Fame’ (2019) as an honor as well as a significant highlight.

Fusión Latina, musical duo from Los Angeles California. Artists with a great career as soloists and now teaming up in the same dream. Yanirey from…

Ask anyone, employee or client, and they will tell you the heart of Natura is Rafaela Chagas. She is the founder and head esthetician for…

The McKinney Fire was burning out of control in Northern California’s Klamath National Forest, with expected thunderstorms a big concern Sunday just south of the…